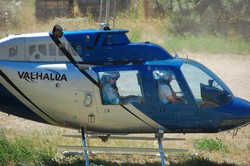 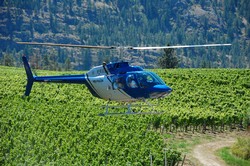 From vineyard rookies to those connoisseurs who need a new angle on the Okanagan wine scene, try a Heli-Wine Tour. This is a one of a kind experience tailor-made by you which combines scenic helicopter flights around the Okanagan with stops at your choice of several participating wineries to enjoy the beverage that has made the valley so well-known. Valhalla Helicopters has agreements to land at approximately 30 vineyards around the Okangan, Shuswap and Similkameen. 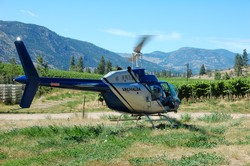 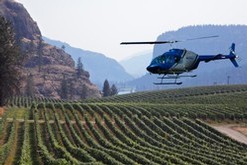 A full day Heli-Wine tour is a 6 hour experience - starting at 10am and ending at 4pm - where you select about 4 wineries to visit. There are over 30 participating wineries from the Shuswap in the North to the US border in the South.

You may choose to go north with winery options in Kelowna, Lake Country and Salmon Arm, or select a southern route with vineyard choices in Lake Country, Kelowna, Summerland, Naramata, Penticton, Okanagan Falls, Oliver, Osoyoos, Cawston and Keremeos.The helicopter can seat up to 4 people (weight restrictions apply), but some wineries are only accessible with one couple onboard.

Most wineries have picnic spots and several have restaurants or will do a special catered lunch if you'd like to add that on.

Click here for a list of the Heli-Wine Tour Participating Vineyards.
Book by emailing tours@valhallahelicopters.com or call them at 1-866-769-1486.

Sparkling Wine for your Okanagan Wedding

With a full champagne flute, you can get about 5.5 glasses per bottle, but you can double that by serving half flutes.  You can estimate 1-2 glasses at the welcoming reception in the first hour, 1 glass per toast and then 1-2 more every hour.

How to calculate how much wine you will need:

Always allow a little extra in case of breakage or unexpected toasts.  If you do have a bottle or two left over you can always save it to celebrate your first anniversary together or another celebratory occasion.

For additional help contact one of Blue Mountain’s friendly staff to help
you plan your sparkling and table wine requirements.
(250) 497-8244 / bluemountain@bluemountainwinery.com

As you drive along Allendale Road towards Blue Mountain, you may notice small wooden boxes on many of the fence posts.  These boxes have been set up to provide nesting sites for our local bluebirds – and Blue Mountain has over 100 of them scattered throughout the vineyard!  These nest boxes are home to the two species of bluebird found in British Columbia: Western Bluebirds (Sialia mexicana), which are royal blue with a rusty breast, and Mountain Bluebirds (Sialia currucoides), which are a brighter blue with a light blue breast.

During the spring and summer, it is common to see these beautiful birds perched on top of the boxes, or popping in and out of them with material to build their nests or food for their nestlings.  Both Mountain and Western Bluebirds are secondary cavity nesters – meaning that they nest within holes in trees, but they are unable to create their own their own holes, and depend on those created and abandoned by other species (such as woodpeckers).

During the early and mid 20th century, landscape changes – largely caused by humans – resulted in a decrease in the number of cavities available for bluebirds.  Partly due to the limited availability of nesting sites, bluebird populations began to decline.  In response, concerned citizens set up trails of nest boxes like the one you see here.  Today, most bluebird populations are stable – and here in the Okanagan, the Western Bluebird population appears to be growing.

Many of the vineyards in the Okanagan have put up at least a few bluebird boxes (although most don’t have as many as Blue Mountain!).  Vineyards are excellent spots for these boxes because of the bluebirds’ diet and foraging strategies.  During the summer months, they feed almost exclusively on insects – making them a useful tenant in vineyards.  To catch their food, they perch where they can see the ground clearly and look for their prey.  If you spend some time watching one of the bluebirds at Blue Mountain, you will notice that it spends much of its time perched on a vine or a fence post, dropping down occasionally to the ground to catch an insect.  Unlike many other birds, bluebirds are also quite tolerant of human activity around their nests.

Although not all of Blue Mountain’s many bluebird boxes are occupied in any given summer, the vineyard is home to a large breeding population of Western Bluebirds and a smaller breeding population of Mountain Bluebirds. During the summer of 2012, over 25 Western Bluebird pairs nested in the vineyard, producing more than 150 eggs in total and fledging over 75 nestlings successfully.  Two pairs of Mountain Bluebirds also chose to nest at Blue Mountain.  Each pair had two successful nests over the course of the summer, and together they produced 12 fledglings.

Besides the bluebirds, several other native species can be found nesting in bluebird boxes.  At Blue Mountain, the boxes are often home to Tree Swallows and House Wrens.  Other possible inhabitants include Black-capped and Mountain Chickadees and Red-Breasted and Pygmy Nuthatches.

So as you pass through the vineyard on your way to the tasting room, make sure to keep your eyes open to catch a glimpse of some of Blue Mountain’s smallest inhabitants!

Note: For the past few years we have been fortunate to have graduate students from Queens University who study our bluebird populations, monitor the nest boxes throughout the season, recording important data such as nesting periods, numbers and dates of eggs, hatchlings and fledglings. Catherine Dale is a Queens University student.  She is pleased to report that the bluebird numbers are rebounding and although still at risk are certainly seeing improvements over a few years ago when their studies first started. Thanks to the students at Queens University who have studied the bluebirds at Blue Mountain.

For more information on bluebirds in the southern interior  http://www.bcbluebirds.org/SIBTS/Welcome.html