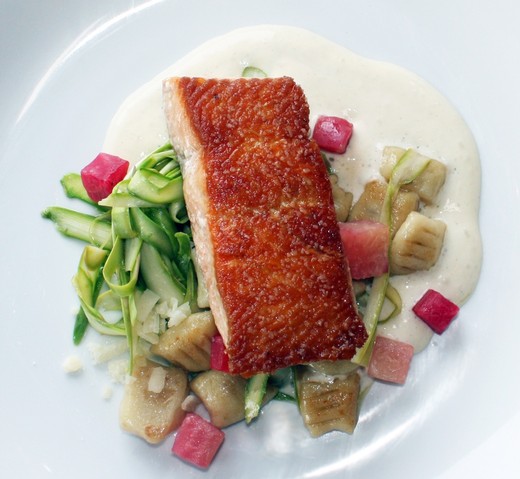 The Gnocchi
Be sure to choose a potato that feels firm. This will ensure that it is fresh, older potatoes can become soft and sweet, resulting in sticky, gummy gnocchi. Wash the potato thoroughly, then stab the potato several times with a fork, this will allow the release of moisture, as well as allow seasoning into it. Make a small mound (about a fistful) of kosher salt in the bottom of the pan, and press the potato into it, making a divot, so it won’t roll. Cover with foil and bake at 350-400° for 40-60min, or until it’s soft all the way through. Turn the potato at least once during the cook time. Cut the cooked potato in half lengthwise and turn the insides up to allow them to steam out and cool, this should take up to 20 minutes. Using a box grater, hold the potato by the skin side and shred the insides, leaving the skin in your hand. Discard the skin. Crack the egg into the potato; add about half the flour, a pinch of salt, and a little black pepper. A couple gratings of fresh nutmeg would go a long way here too. Bring the mixture together using your hands, kneading gently. Depending on the moisture in the potato, you may require more, or all of the remaining flour. The result should be a little sticky, but still manageable. Once the dough has come together, form a ball and rest it covered with a tea towel, on a floured surface for about 10 minutes. This will give the flour time to hydrate and the gluten time to relax. Now divide the dough into four pieces using a knife or pastry scraper, and then each ball into two, giving you eight pieces. Roll each piece using both hands, into a long tubular shape. Now, cut the tubes into small pieces about ½ an inch long. Cook the dumplings in heavily salted, boiling water (be sure to use a lot of water). They should take about 3-5 minutes, depending on the size, but the best way to judge is to wait until they rise to the surface, then wait one minute. Strain the gnocchi, lightly oil them, and set aside.

The Beets
If you can’t find candy cane beets, use golden beets, so the color won’t run into your cream sauce. Boil the beets in salted water, whole, with the skin on, until you can push a paring knife though them without much resistance. Peel them using a tea towel, dice them into ¼ inch squares, and set aside.

The Emulsion
Cut the top off the bulb of garlic and make a little package with tinfoil to wrap it in. Season the garlic with salt and pepper, and drizzle a little olive oil onto it. Wrap the package around the garlic and place it in an oven pre-heated to 350°, for about 30 minutes before you start making the sauce.  In a small saucepan, heat the cream until it’s just about to simmer, remove from the heat and squeeze the roasted garlic from it’s skin, into the cream (the garlic should be soft and golden in color). Use an immersion blender, or a regular blender to puree the garlic into the cream. Season the cream with salt, pepper, and the juice of one lemon. Pour the mixture into a whipped cream dispenser, and charge it with two cartridges. If your blender does not puree the garlic fine enough, you may have to use a sieve to strain the mixture before placing into the dispenser, to prevent clogging. The emulsion is now ready. To keep it warm before use, wrap a kitchen towel around it and place it somewhere warm.

The Asparagus
For two to six weeks a year (depending on the weather), asparagus is produced here on Vancouver Island, and those are the only two weeks we get to use them in our restaurant. If you have never had locally produced asparagus, I urge you to source some out. Asparagus, once it is harvested begins to decline in quality immediately, after a couple days the sugars inside begin to convert to starches, and it becomes astringent and woody. That being said, I would reserve this dish for spring and early summer. Using a peeler, hold two spears by the tip and shave the bottom half down, rotating the spears to get as much as you can (cut the whittled ends off and reserve the tips for another recipe). Place the shavings in a bowl, season with salt, pepper, a squeeze of lemon and a drizzle of olive oil. Toss and set aside.

The Salmon
Choose your salmon wisely, if you live on or near the coast, fresh wild salmon should be readily available during the spring and summer months at your nearest fishmonger or grocer. I would suggest using only fresh, wild salmon. However, there are some frozen products available that are of high quality, and if you live inland it’s probably your best option, since fresh salmon will have to travel for longer than it is viable. Have the butcher skin and portion your salmon into 200-250g portions (6-8oz). Alternatively, if you’re feeling adventurous, buy the fillet, and do so at home.

Putting it all Together
Heat a large skillet over medium/high heat, add enough vegetable oil to lightly cover the bottom of the pan. When the oil starts to shimmer, season the pieces of salmon with salt and pepper, and place them face down in the oil (the side where the skin used to be should be facing upwards). Turn the heat to medium/low, and sear for 2-4 minutes, depending on the thickness of your fillet. Place the whole pan in a 350° oven, without turning. Meanwhile, in a hot pan (med/high), drizzle a little vegetable oil, and place a knob of butter (the oil will help prevent the butter from burning). Once the butter melts and foams, get the gnocchi in there, and give them a toss or two to coat them in the butter. Continue sautéing them until they take on a little color. Now get the beets in the pan. Sauté the beets and gnocchi together for a minute, and then add a little moisture. Water will do fine, but a splash of chicken stock or vegetable stock would be best. You will only need a tablespoon or two; just enough to create a glaze. Check your salmon, it should be medium. If it’s done take it out and remove it from the hot pan to prevent over cooking. Get your plates together. Using the whip dispenser, give each plate a large dollop of the warm sauce, now make a little nest on each plate using the marinated asparagus. In the nest, place your gnocchi and beet mixture, and then your salmon. Now, eat.